‘No escape from telephones’, this 1953 prediction actually comes true

In 1953, a telephone company chief predicted that there’ll be no escape from telephones in the future. 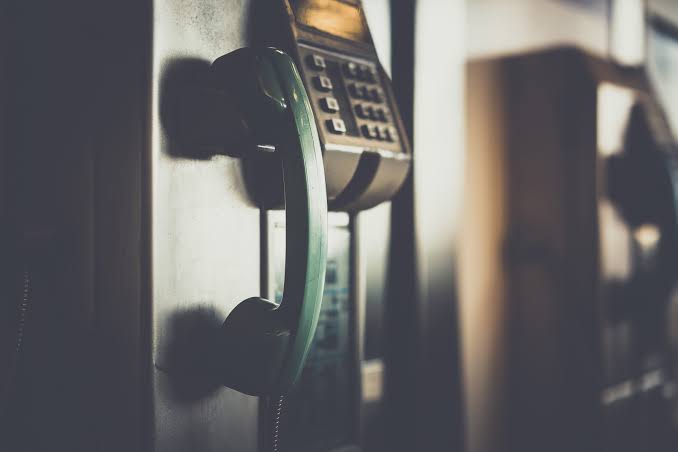 “There’ll Be No Escape in Future From Telephones” reads the title of a newspaper clipping that has been making rounds on social media platforms including Facebook and Twitter. Published in the Tacoma News Tribune in 1953, the article written by the Associated Press (AP) quotes Mark R. Sullivan, President, Pacific Telephone and Telegraph Company as he predicts the following about future telephones:

“Just what form the future telephone will take is, of course, pure speculation. Here is my prophecy:

“In its final development, the telephone will be carried about by the individual, perhaps as we carry a watch today. It probably will require no dial or equivalent, and I think the users will be able to see each other if they want, as they talk.

“Who knows but what it may actually translate from one language to another?” 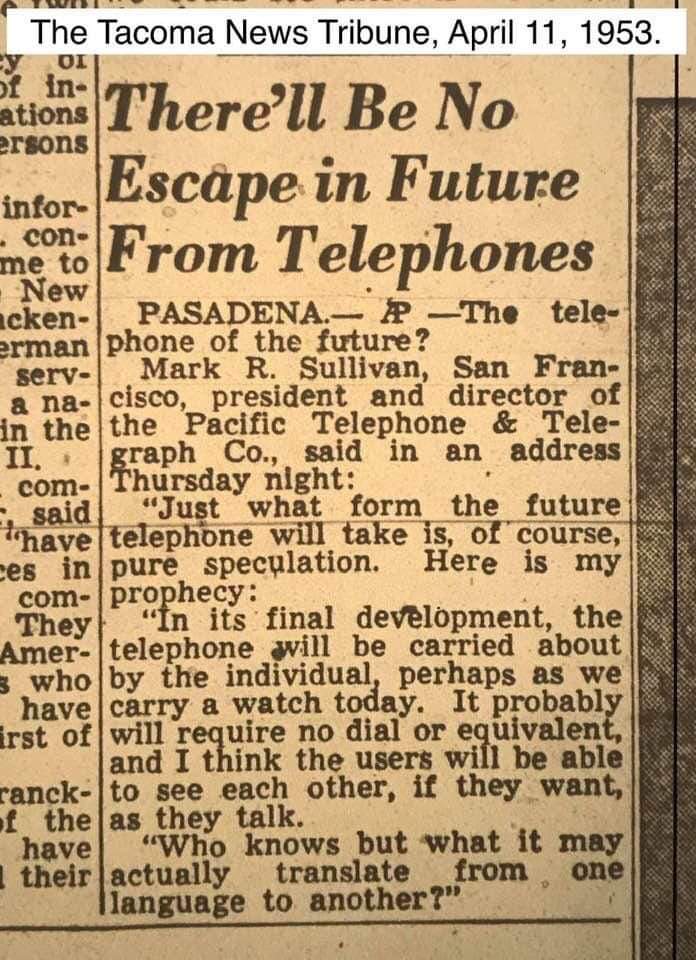 From telephone to Smartphone: A brief history

Over the years, the telephone or mobile industry has undergone a major transformation owing to the evolving needs and expectations of the users. From Alexander Graham Bell’s first telephone call in 1876 to the arrival of the first mobile phone, Motorola DynaTAC 8000X in 1983, it took more than 100 years to go mobile. 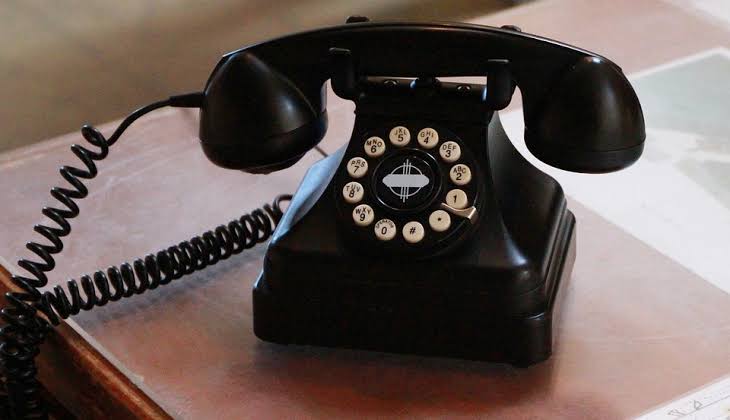 Then came the first smartphone, Simon Personal Communicator, which was introduced in 1992 by IBM. The phone featured an LCD touch screen, clock, calendar, address book and was priced nearly USD 1,000. Then in 2002, Blackberry debuted its first mobile phone, BlackBerry 5810, with QWERT keypad, email and text messaging support but it lacked an in-built microphone and needed a headset to make a call.

In late 2003, the Nokia 1100 feature phone was launched which gained immense popularity worldwide and thereafter the smartphone era arrived with the launch of iPhones in 2007, Android in 2008 and Windows phones in 2011.

And now in 2019, more than half of the global population owns a smartphone and it’s hard to imagine our world without mobile phones. They become a part of our lives right from the moment when we wake up to the moment we sleep at night. We have grown so used to mobile phones that we simply can’t think of a life without it.

As Sullivan envisioned “in its final development, the telephone will be carried about by the individual, perhaps as we carry a watch today,” today smartphones have become so important part of our lives that we carry them everywhere.

Unlike the cell phones that were merely used as a communication tool, smartphones aren’t just limited to texting and calling. From using applications to track health, cameras for photography, surfing the Internet, banking, watching favourite shows, using social media and a lot more just revolves in and around smartphones and we rely on them for all of them.

More than a third of consumers check their smartphones within five minutes of waking up in the morning and about 20 per cent look at their phone more than 50 times a day, found a Deloitte survey covering 31 countries from across 5 continents with 53,000 respondents,

Increasing internet penetration combined with stronger hardware, software capabilities, and consumer curiosity is driving the global smartphone market. Furthermore, advances in emerging technologies such as 5G, Artificial Intelligence, Virtual Reality, Augment Reality will enhance and accelerate the adoption of smartphones and we will soon be able to do even more with our smartphones.

Innovation at its peak 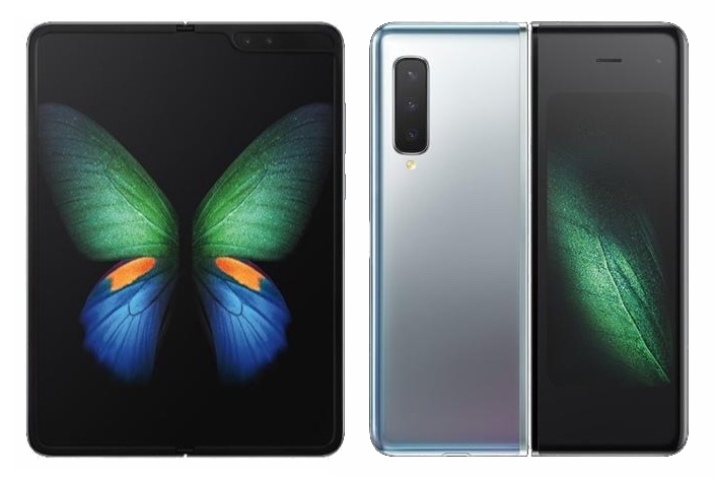 With the launch of its first foldable phone-cum-tablet, the Galaxy Fold, South Korean technology giant Samsung has opened a new frontier in the smartphone industry. The Samsung Galaxy Fold, as the name suggests, folds into a compact device with a cover display and turns into a tablet when opened.

Smartphone makers, especially those from China, have reignited the so-called megapixel war to woo consumers and increase their market share. From 48MP to 64MP to 108MP, major smartphone vendors including Xiaomi, Realme, Vivo have launched high-resolution camera phones at affordable prices.

As a recent example, Xiaomi, after debuting the Redmi Note 8 Pro with a 64-megapixel camera, has unveiled the Mi CC9 Pro aka the Mi Note 10 with the world’s first 108-megapixel Penta camera system.

Smartphones that come with Waterfall or Wraparound displays like the Mi Mix Alpha or the Vivo Nex 3 replace the physical keys with virtual ones. For example, in the Vivo NEX 3, the physical volume key and power button have been replaced by the pressure sensor array and multi-sensor calculation model while reducing false touch. With the X-axis linear motor, the actual touch of the button is simulated, and the vibration is crisp and neat. 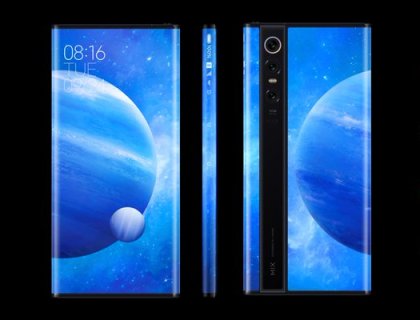 Chinese smartphone vendor Xiaomi recently unveiled the Mi Mix Alpha, a 5G concept smartphone with the world’s first Surround (all-round) Display with a screen-to-body ratio of more than 180.6 percent. The device has minimal bezels on the top and bottom, a Driver IC for display on both sides, pressure-sensitive edges coupled with a linear motor that simulates the touch of physical buttons and a brand-new display acoustic technology to replace the traditional earpiece receiver and proximity sensor.

While some people think that the world has reached the peak of smartphone innovation and other innovative gadgets like wearables, smart screens will replace them soon. Others argue that they won’t be replaced anytime soon, instead, they will pack more powerful hardware and software to handle more complex applications, similar to computers.

In my opinion, smartphones are not going anywhere, at least not in the short term, and the world is set to witness the next wave of smartphone innovation. With the ever-increasing competition in the industry, it will be interesting to watch who leads the fierce smartphone race and how far it goes. 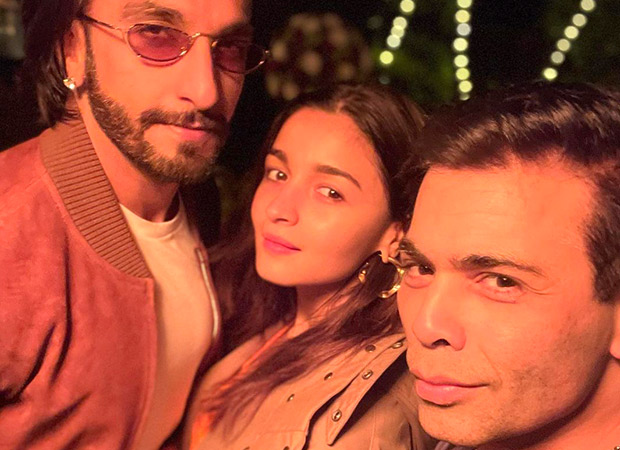 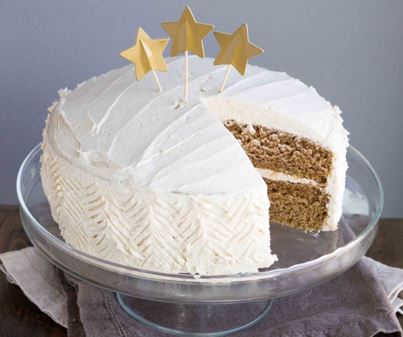