Bollywood actress Katrina Kaif took to her social media on Wednesday to wish her bother-in-law, actor Sunny Kaushal, on his birthday today. The actress often shares some family moments on her Instagram account and today was one of the days, she shared a rare glimpse. The actress shared an unseen photo from one of her wedding festivities last year in December. 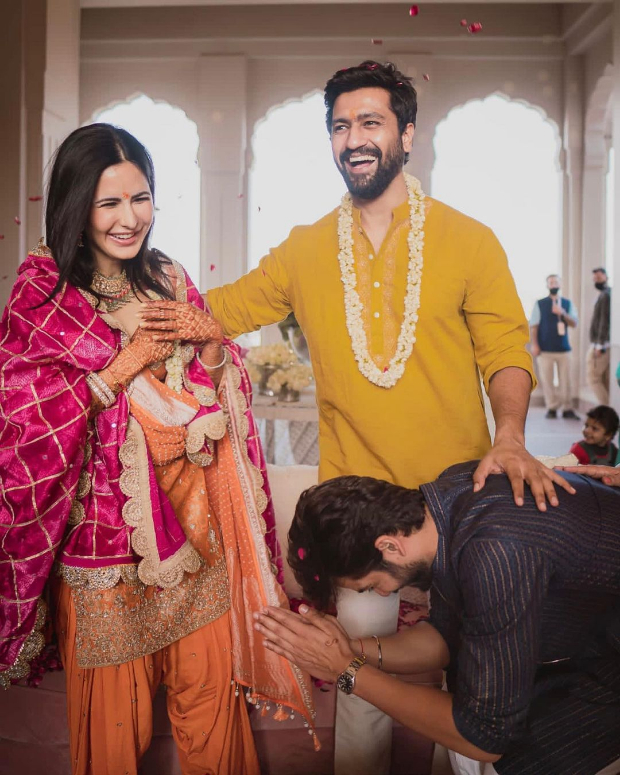 In the happy photo, Sunny Kaushal is seen taking blessings of his brother and sister-in-law Vicky and Katrina. Dressed in traditional Indian attire, the actress captioned the photo, “Jeete raho, khush raho.”

Vicky Kaushal also took to his Instagram to share a lovely message for his younger brother. Sharing the photo, the actor wrote, “Happy Birthday to the most सर्व गुण सम्पन्न (sarv gunn sampanna) Kaushal! Love you @sunsunnykhez.” He also added a kiss emoticon, a heart and birthday cake emoji towards the end of the post.

On the work front, Katrina Kaif will next star in Sriram Raghavan’s Merry Christmas with Vijay Sethupathi. Her next release in theatres is PhoneBhoot with Siddhant Chaturvedi and Ishaan Khatter. She also has Tiger 3 with Salman Khan slated for April 2023 release. The actress has also signed Farhan Akhtar’s next Jee Le Zaraa with Alia Bhatt and Priyanka Chopra.

Meanwhile, Vicky Kaushal will next star in Meghna Gulzar’s SamBahadur with Sanya Malhotra and Fatima Sana Shaikh. He also has Laxman Utekar’s next with Sara Ali Khan and YRF’s next with Manushi Chhillar.

On the other hand, Sunny Kaushal will be seen in Chor Nikal Ke Bhaga with Yami Gautam on Netflix.